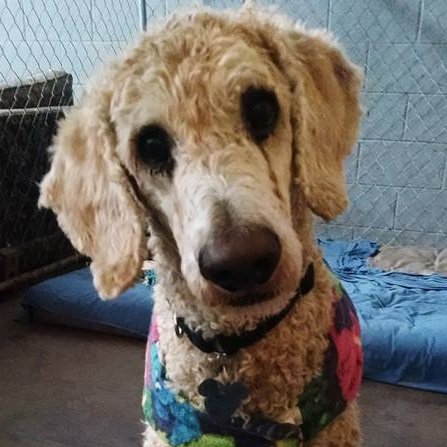 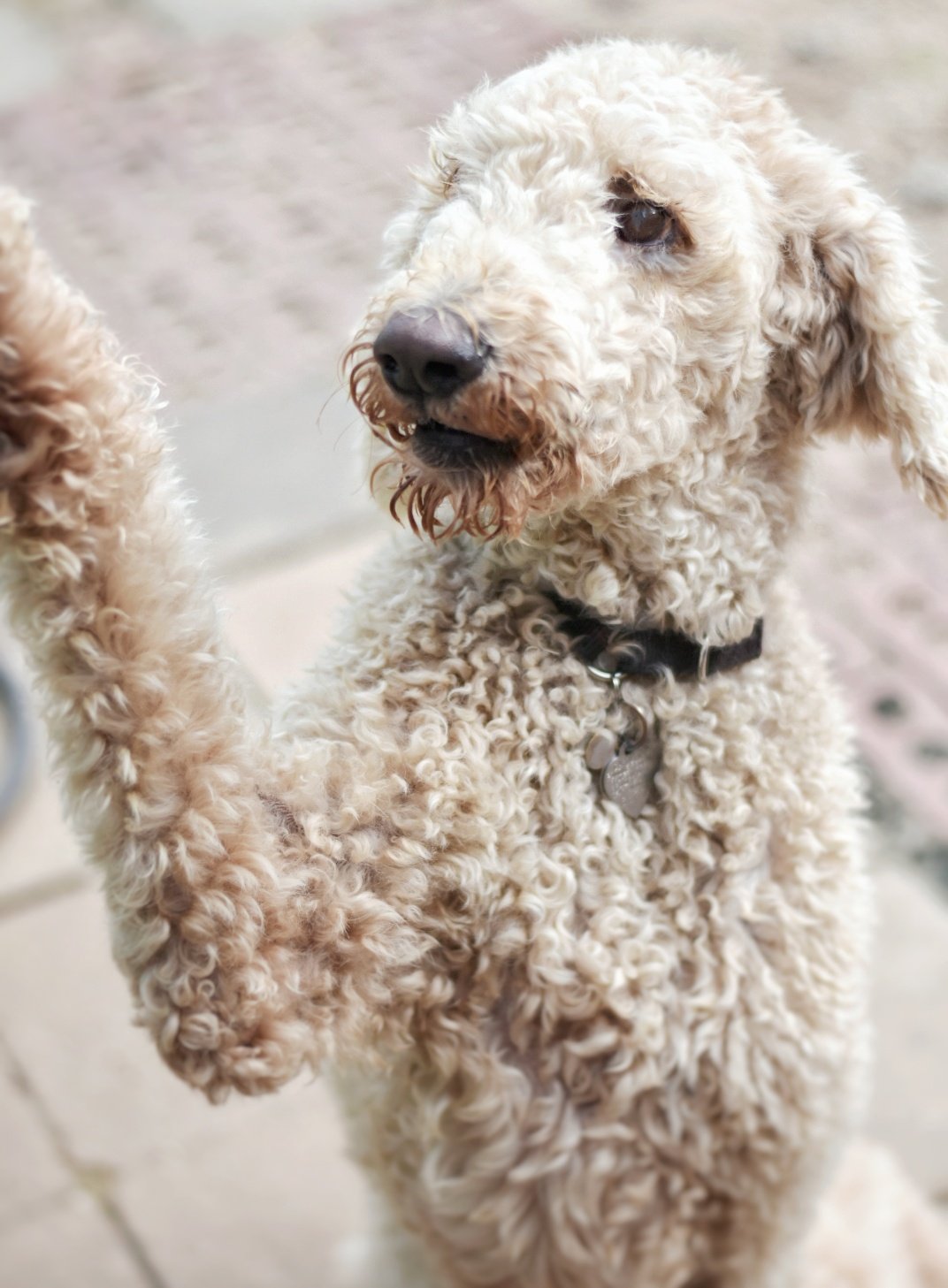 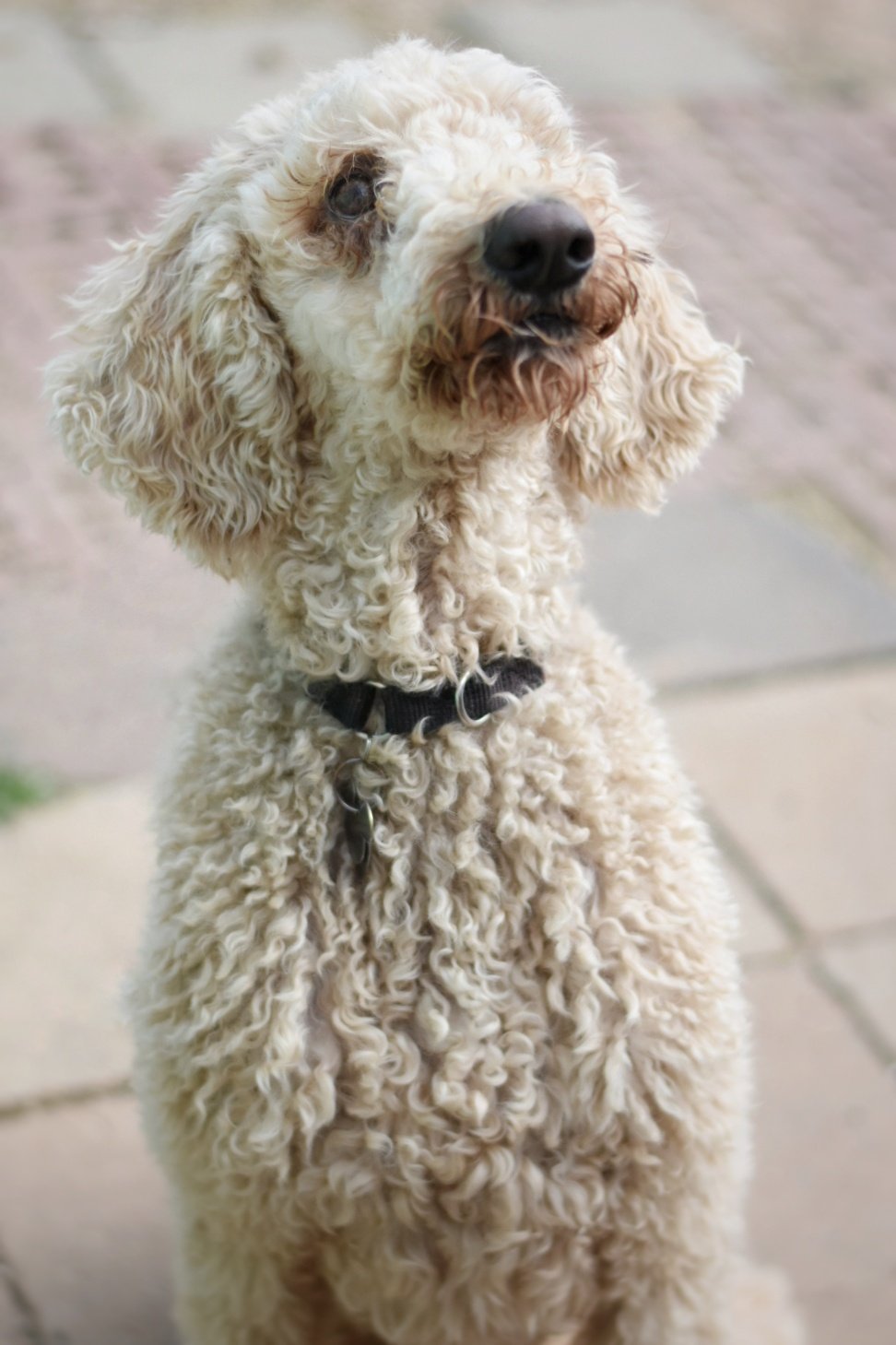 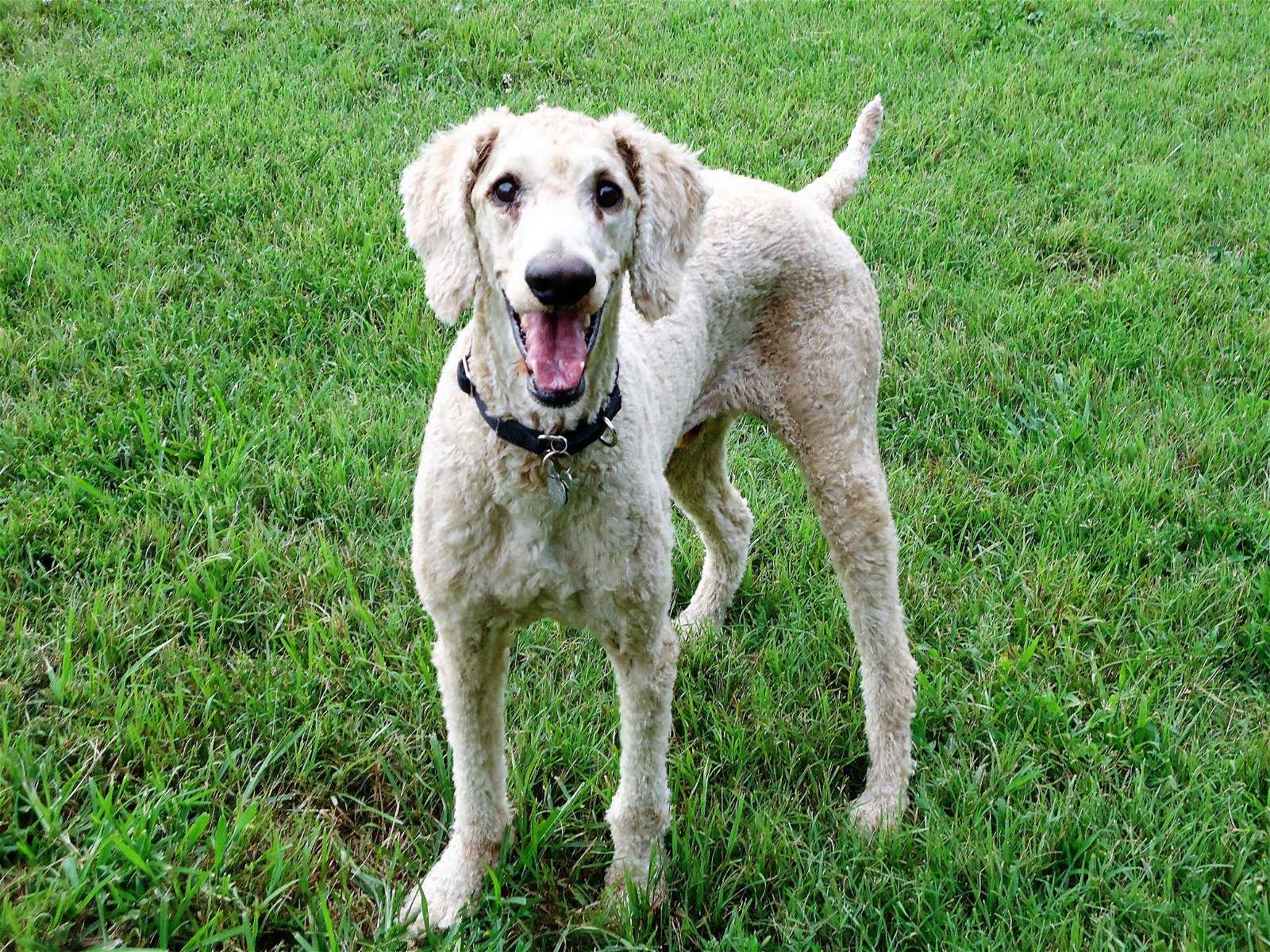 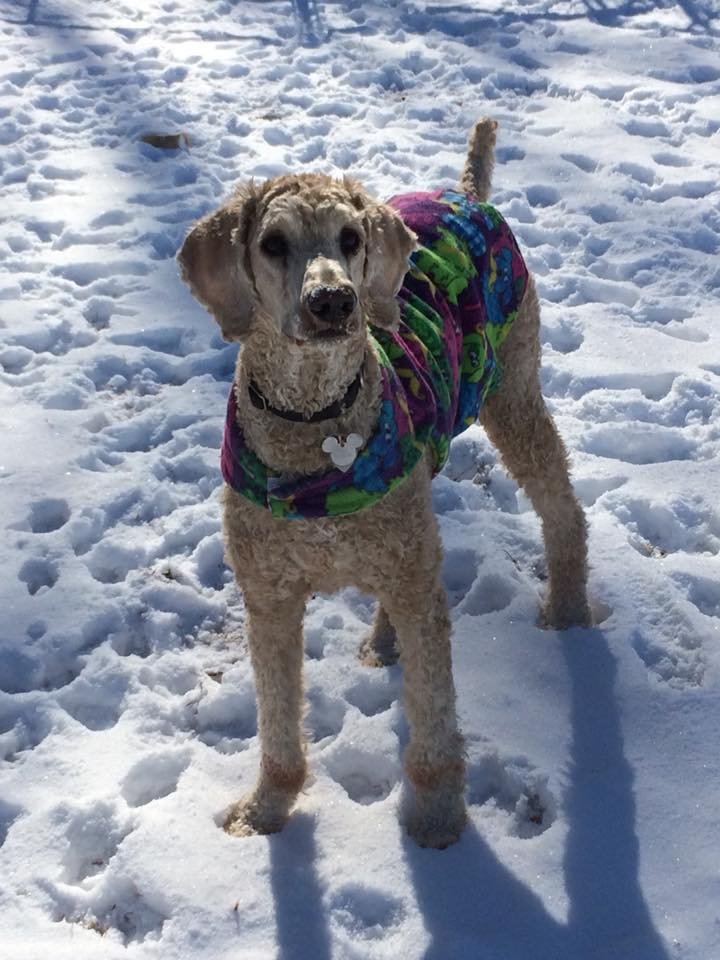 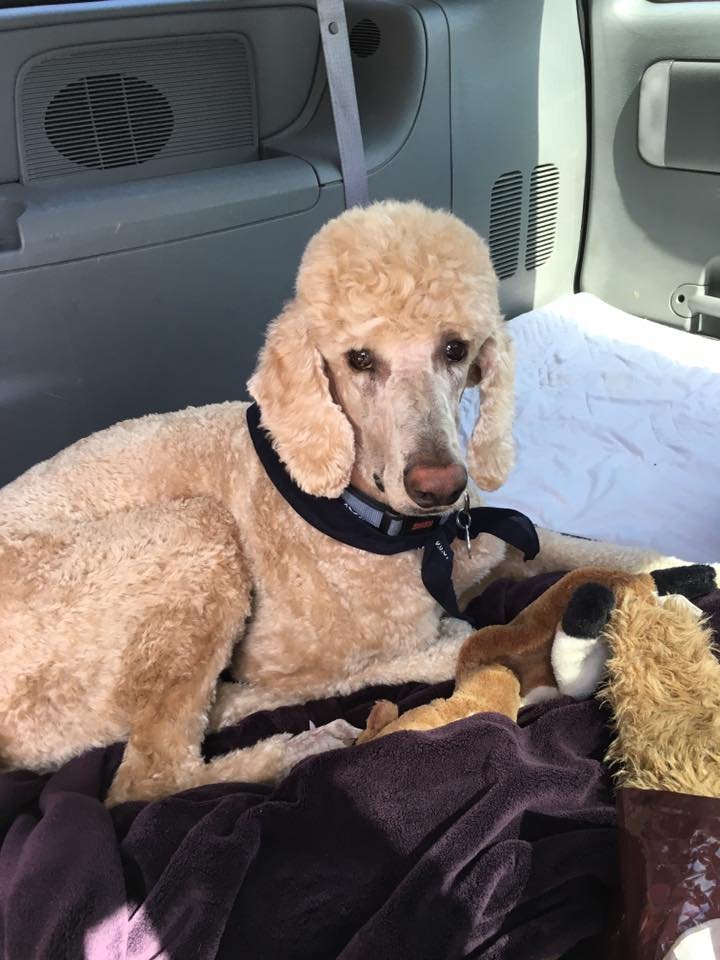 Name: Kingston Buddy
Gender: Male
Breed: Standard Poodle
Estimated Birthdate: 8/20/2012
Height: about 27 at the shoulder
Weight: about 60 lbs
Good with dogs: yes
Good with men/women: Yes, but I am apprehensive and afraid when I meet new people. It could take several meetings for Kingston to accept you.
House trained: yes
Crate trained: yes
Leash trained: no
Must have fenced in yard: Yes without question, Kingston needs the security of a fenced in yard to play.  He is not a leash walk only kind of guy
Adopt

Kingston is a permanent SOS dog and is not available for adoption.

Kingston was originally purchased as a puppy by a young woman in what she thought was a stable relationship but when Kingston was just a year old, the couple broke up and Kingston and his owner moved in with her parents.  At the time he was a pretty happy pup with just a bit of a resource guarder showing . But....the owner's father did not like Kingston and banned him from the house shortly after they moved in.  The owner moved Kingston from friend to friend trying to find a safe place for him and as he bounced and bounced, his behavior grew worse.

A few months after, she moved in with a relative who was openly verbally abusive to both Kingston and his owner.  The owner tried training and it was starting to work but she was not consistent with following through which confused Kingston even more.  Her trainer observed the verbal abuse first hand.  If there was physical abuse, it was never in front of anyone that we know of but the possibility exists.  Eventually, the owner got back on track and moved into her own apartment but at that point, Kingston got little exercise and socialization.  The owner worked long hours and Kingston was often crated 10+ hours and left alone.  His behaviors (charging and biting at strangers) finally got to the point where the owner realized neither of them were happy and reached out to rescue.

In his first day at the poodle farm, Kingston bit and drew blood on a caregiver who simply entered the room he was in.  At that point, our director took him home and the first full morning he was with CPR, she took him to a vet where he was proscribed Prozac.  The Prozac has been a tremendous help in curbing Kingston's anxieties and aggression.  Kingston has not bit anyone else since that day.

When Kingston is on his medication, he is fairly even tempered and able to be worked with.  When Kingston is in a good mood, he is a joy to be around. He is playful and affectionate and will chase a ball, go for a walk or cuddle on the couch watching tv.  He will always be a problem around strangers and will bark and snap at anyone coming in his house that he does not know. Once he knows you, he's much easier.  He also meets strangers easier when he is outside his yard and on leash.

There is much more to Kingston - more that makes more sense if he's met in person.  Kingston needs an extremely experienced owner who can work with his anxieties and challenges and understand that much of the way he is was created by an abusive human.  He will get better and better but he will always have a strong personality that needs understanding.

Kingston can be a lively and loving canine companion in the right home.  He has no real preference male or female and I think would actually like a couple to live with.  He could be an only dog although a very stable, strong standard poodle brother or sister that would be able to keep up with him and continue to teach him how to play the right way  would work.  Kingston likes other dogs but he does not know how to enjoy their company.

Kingston is house trained and crate trained although the crate is not his favorite place.  He pulls on a lead but can be walked nicely on a front lead harness.  He absolutely loves toys and he will gather all his squeaky toys together on his bed.  He can stay outside and watch the countryside go by him for hours.

NO CATS!!!!! ABSOLUTELY NO KIDS UNDER 18 YEARS OLD

Can't have a dog of your own? Have a soft spot for old, sick or hard to place dogs? It only takes a $20 a month donation for me to be your virtual dog! I need at least 10 virtual adopters (sponsors) to help cover my monthly costs.  If I have medical challenges I need even more!  If I have medical challenges I need even more! The caregivers at Carolina Poodle Rescue will do the rest.  Just think, without ever having to leave your home, you can have your very own online dog that will send you update emails, make Facebook posts, and be eternally grateful for your support!  Go to the donate link at the top of the page for instructions as to how to donate. Questions?  Email: cprsosdogs@carolinapoodlerescue.org