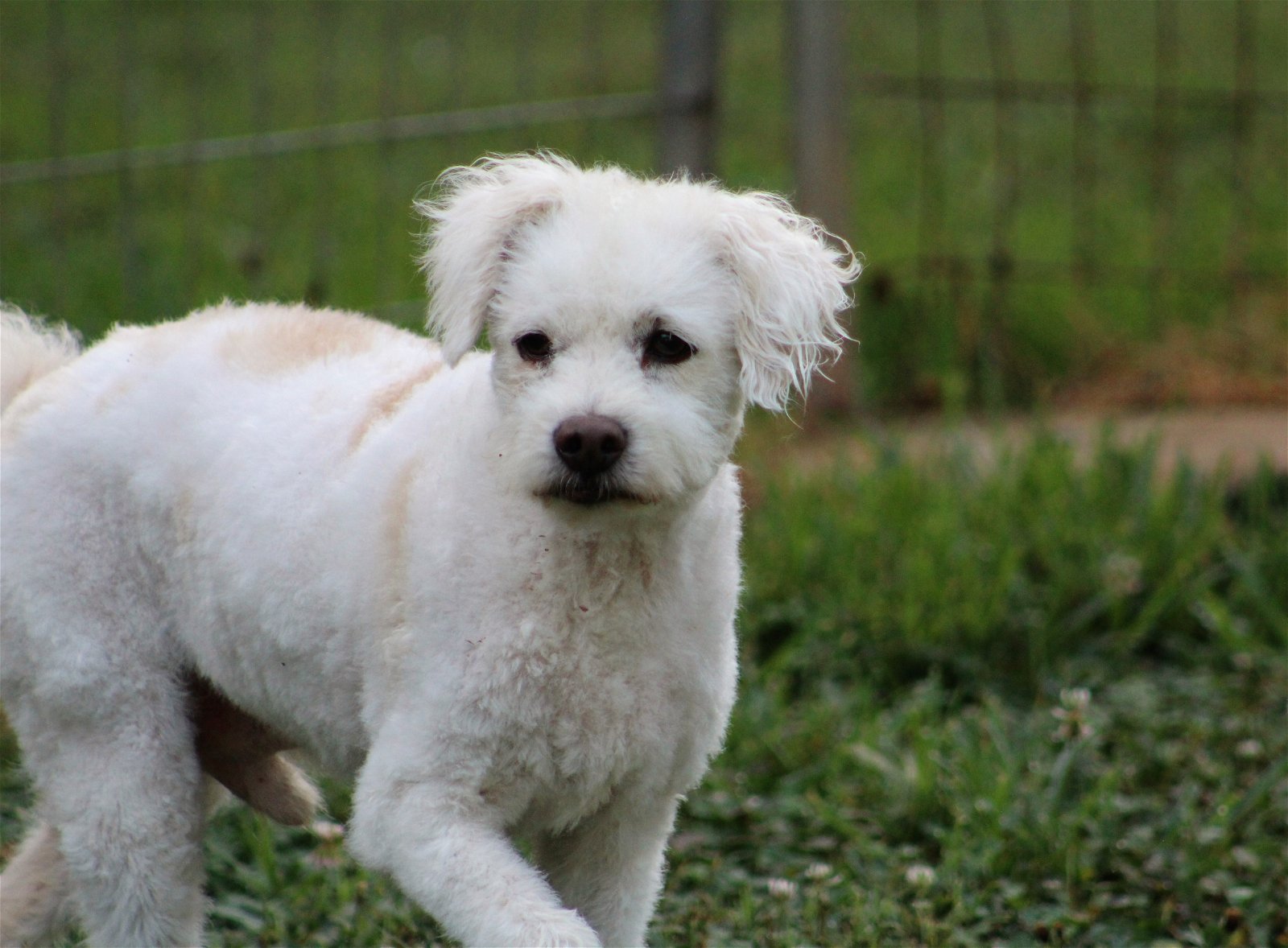 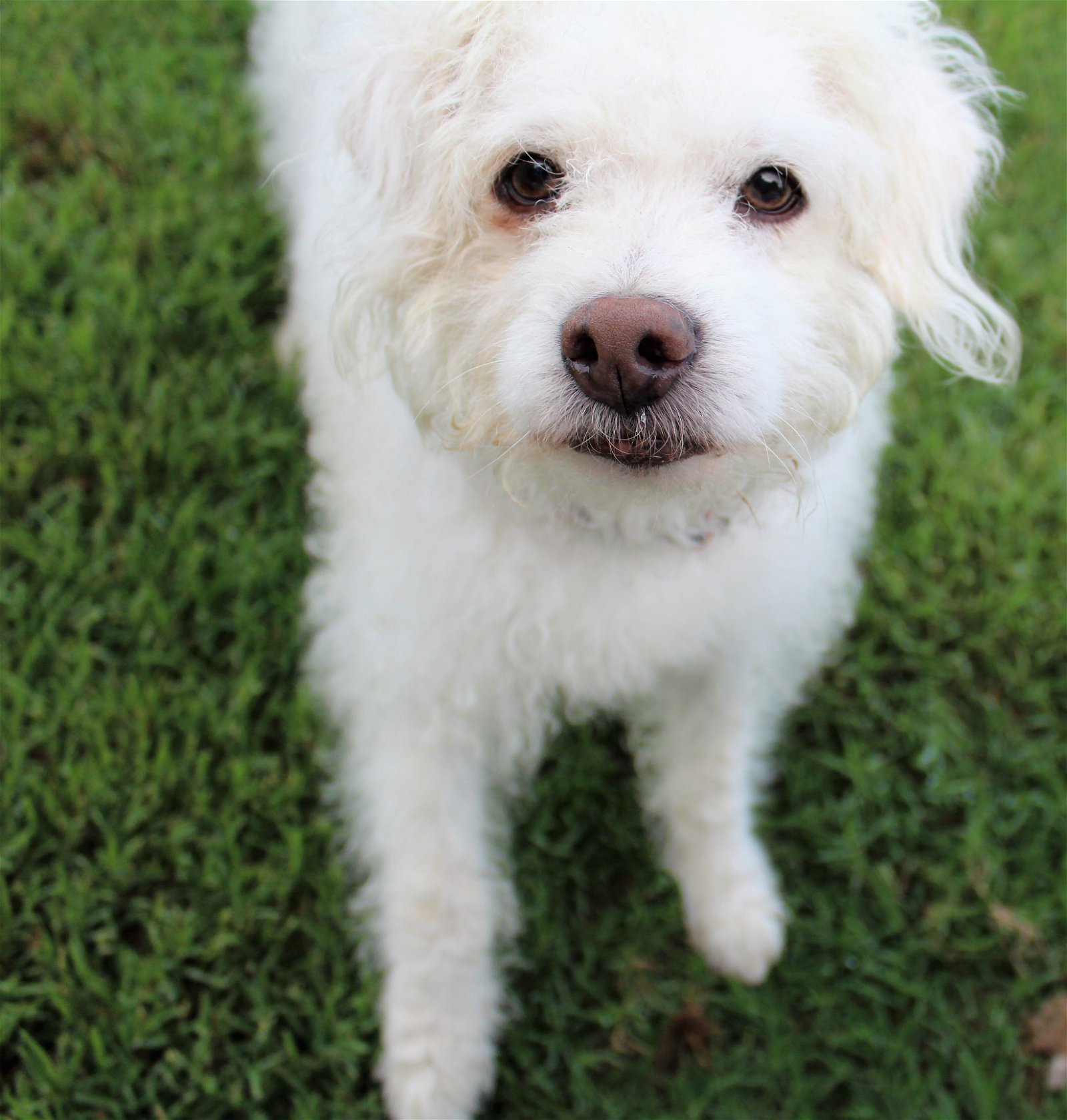 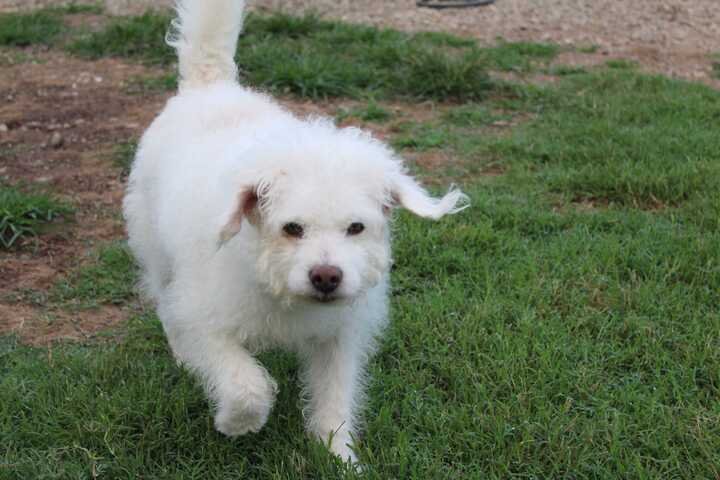 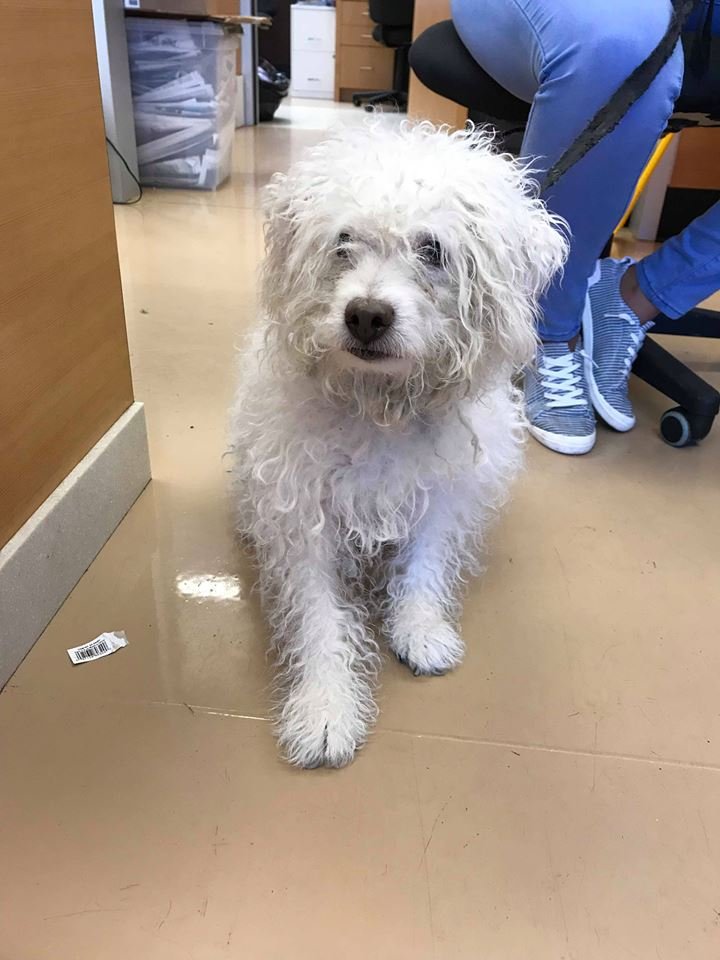 Name: Marty "Care Bear" Doodle
Gender: Male
Breed: Poodle / Jack Russell Terrier Mix
Estimated Birthdate: 9/21/2011
Height: 12" at shoulder
Weight: 14 lbs
Good with dogs: Yes
Good with men: Sometimes
Good with women: Sometimes
House trained: No
Crate trained: Yes
Leash trained: No, leashes scare him
Must have fenced in yard: Yes - leashes scare Marty "Care Bear" (our nickname for him is Care Bear). He would be happier with his own yard to romp and play in.
Adopt

Why am I with a rescue group? In 2018, Marty Bear Doodle was left tied to the outside of an animal shelter in GA by his owners. CPR pulled him from the shelter. We placed him but he returned to us a year later when his two-person, socially active home realized he would be happier in a quieter environment.

Bear has horrible ears - we've resolved the infection for now but he will need to be watched for life on his ears. He is on a bi-weekly ointment for his ears. Marty Bear Doodle also has extensive discospondylitis and lumbosacral disease.  He sometimes need to have a medication called methacarbonal when his back goes out. Finally, Marty is HIGHLY flea allergic. A single flea will cause a major skin issue. He must be on regular monthly preventative.

Bear likes for things to be on his own terms and he is not afraid to get vocal about it! He likes having attention but he’s not fond of people invading his space continuously (he wants to be the one to initiate anything). He likes to think that he can be a knight in shining armor and currently likes to ‘protect’ his best friend Angie.

Care Bear needs a quiet home with very few changes or visitors. He is smart and sensitive to his environment.  He will need patience communicating his needs to you.  He was potty trained in his home and could go outside in a fenced yard with no leash.  He will walk on a leash, but they scare him and he prefers to be home instead. He will bark at you if you do not give him time to adjust to the change (going outside/inside).

Bear could be an only dog with a patient human or he could have calm, stable doggie companions.  The big thing for Bear is no change.  Bear likes treats and responds well to treats before a change; transitions/change is difficult for him. The types of changes that are seem to be focused on someone coming in or out of the house. In his current foster home, change is constant and he's getting used to it.  With the right understanding owner, he would be great.  We know this boy deserves to have a special person to help him and we hope we can find the right person and home for him!

Bear is very food oriented and this is the way to his heart. So far he has gotten along with other dogs he has met but in his home he was not happy with other dogs - probably because they came in or out.  When he is scared of another dog, he barks at them like he's never been around other dogs before.

Bear is a special boy whose past is a mystery and whose future needs patience and a firm and experienced handler.  In the right home, Bear will be an amazing companion and best friend.

Important Note - Bear sheds slightly - less when he is kept short.  He is not hypoallergenic. We think he is a mix of long haired jack russell and poodle.

I love my Virtual Adopters! I AM LOOKING FOR VIRTUAL ADOPTERS